Tonight I am participating in a panel discussion for the Society of Australian Genealogists about whether DNA is the 21st century tool for all family historians. I have been invited partly because of my experience using DNA in family history and partly because I specialise in the research process. I run the Society’s Family History Fundamentals course and I also lecture on a range of methodological topics such as research planning, proving your family history and source citations.

I first had my DNA tested with Family Tree DNA in 2017. At that time I was not fully aware of the potential that DNA had for my research, but I did have a question that I hoped it might answer. I had been researching my family history for over a decade but had still not been able to figure out who my paternal grandfather’s father was. His parents were unmarried and his father was not listed on his birth certificate. So I hoped that the results of DNA testing might provide some clues. When I received my results I realised that the process was not that simple. I had to learn how to analyse the results and incorporate them into my research. I also had to maximise the potential evidence from my DNA, so I tested with Ancestry DNA, uploaded to Gedmatch and MyHeritage, built up a large family tree on Ancestry and tested available family members.

The first is the identification of Gottlieb Malchow as the father of my great great grandmother Christina Malchow. Gottlieb was married to her mother, raised her and was listed as her father on her death certificate. Yet, the DNA evidence definitively refutes that he was her biological father. The DNA evidence also suggests who actually was her biological father. To me, it does not seem possible that there is another explanation for the evidence, so I think that I would argue that the evidence is also definitive about the identity of her biological father (though I am open to additional evidence to the contrary).

The second example where DNA has definitively disproven the documentary evidence is the discovery that my entire paternal line (except for my father) is not biological. Again, the DNA evidence is definitive. I have no DNA matches at all on that line and I do not match my cousin or uncle. It just is not possible for that line to be biological.

DNA evidence is also powerful evidence when the available documentary evidence is either lacking or is only circumstantial. The same great great grandmother I mentioned above, Christina, had six children. She was unmarried and her family were ashamed by her actions and the names of the fathers of her children were deliberately omitted from the records. The evidence that George Bassett was the father of her daughter, my great grandmother, was circumstantial – town rumour and the fact that one of his sisters brought up one of Christina’s other children. However, the DNA evidence is strong. Thirty DNA matches between myself and descendants of George’s siblings definitively support the conclusion that the father was from that family. A further match from a descendant of another child of George, together with the circumstantial evidence means that the conclusion that George was the father, while not definitive, is reasonable and defensible.

After discovering that my paternal line was not biological, I managed to identify my father’s biological mother by obtaining his adoption records. His mother was named in the records, but his father was not. It was only by analysing the DNA evidence that I was able to identify his biological father and use that information to build out my biological paternal line. While initially my conclusion about his identity was tentative, further analysis has built up a body of evidence that makes my conclusion reasonable and defensible.

Birth death and marriage records can only reveal so much. Last Saturday I gave a lecture at the Society of Australian Genealogists about primary sources for early Sydney, where I explored some alternative sources to enrich your family history.

The idea for the lecture topic came my experiences researching my 5x great grandfather Captain John Townson. He came to Australia on the Second Fleet and was Lieutenant Governor of Norfolk Island for a while, and yet the official records about him are pretty scarce. Probably because he did not leave a mansion behind to become a historic building! So I am digging deeper into a wider variety of sources to find out more about him and his life.

For the purposes of my lecture, I used the definition of ‘primary sources’ as those which contain first-hand or contemporary information. This information could be in an original source or a secondary source, provided the information has not been significantly altered. All sources can contain inaccurate information, but the value of primary sources is that they contain information from people who may have participated in the event. That makes them special because they provide an insight that other sources do not.

Take the journal of Lachlan Macquarie for example (for those of my readers who are not Australian, he was a Governor of New South Wales). I’ll never be privileged to view the original journal, but I have a copy of it which was published in 1979 by the Library of Australian History. It contains transcripts from the original manuscripts and images of paintings, both held by the NSW State Library. It may have been published well after the events, but the information is presented as transcripts so it can be treated as a primary source.

Within Macquarie’s diary I was fortunate to find a record of his visit to John Townson’s house:

‘Thursday 13th December 1810…I set out this morning at 7 o’clock in the morning from Parramatta with Mrs. Macquarie in the carriage accompanied by the gentlemen of our family and the Surveyor… after a very pleasant drive through thick forest, arrived at Capt. Townson’s farm house on Botany Bay at half past 9 o’clock.

We found the Captain at home in his very pretty neat clean little cottage, where he received us with hospitality and in a gentlemanlike manner… His garden we found in excellent order and producing the largest and best strawberries I have yet seen or eat in this Colony. After breakfast we embarked on the water in Capt. Townson’s boat, in order to see his own and his brother Doctor Townson’s farm, which join each other at this place.’

This amazing image is something you would not find in the standard family history sources.

And speaking of amazing images, paintings can also provide great contextual information for your family history. Paintings of early Sydney show the streets John Townson walked down, buildings he probably visited and people that he knew (including a portrait of his brother, Robert).

Artwork needs to be used with caution when seeking historical information. Some of the paintings of early Sydney were actually painted well after the event. The image below, for example, entitled ‘The Founding of Australia. By Capt. Arthur Phillip R.N. Sydney Cove, Jan. 26th 1788’ is widely used but the catalogue entry in the NSW State Library reveals that it was an historical recreation painted in 1937. Similarly, some paintings of early Sydney were painted in England by people who had never been there. It is important to verify that the source you are using is actually a primary source. Always check the date, as well as the birth and death dates of the painter and whether they had first-hand knowledge of the subject.

The final primary source I want to mention here – just because it is a more unusual source for most family historians – is archaeology.

The mother of Captain Townson’s daughter (both mother and daughter were named Sarah Griggs) lived for a time in The Rocks, which is a part of Sydney down near the harbour. By viewing archaeological excavations in The Rocks and the objects found in them I can get a feel for the size and character of the house that Sarah would have lived in. The archaeological remains are a primary source and anyone can use them at that level. However, their true value is revealed when they are interpreted by reputable archaeologists and historians, in their reports and publications and in exhibitions contained in museums such as the Susannah Place Museum and The Big Dig Archaeology Education Centre.

Illuminated addresses are hand-illustrated manuscripts presented to a person to mark an event or to celebrate a person’s achievements. Typically contained in a leather-bound gold-embossed folder faced with red silk, they contain hand-written text surrounded by a wide decorative border, illustrations, a statement of appreciation and signatures of the presenters. The term ‘illuminated’ derives from the use of gilt, but many addresses use gold or bronze paint rather than gilt. Illuminated addresses were popular in Britain and Australia from the 1850s to the 1930s, with a peak in popularity in the 1880s and 1890s.

General consensus appears to be that illuminated addresses were derived from illuminated books and manuscripts in medieval Europe. Australian examples commonly contain native flora and fauna – a trend which was also evident in art and buildings at that time.

Illuminated addresses were presented in a ceremony and were often accompanied by a purse of sovereigns and an announcement in the local newspapers. They had an important symbolic role, creating and reinforcing social links, and generating expectations of reciprocity. 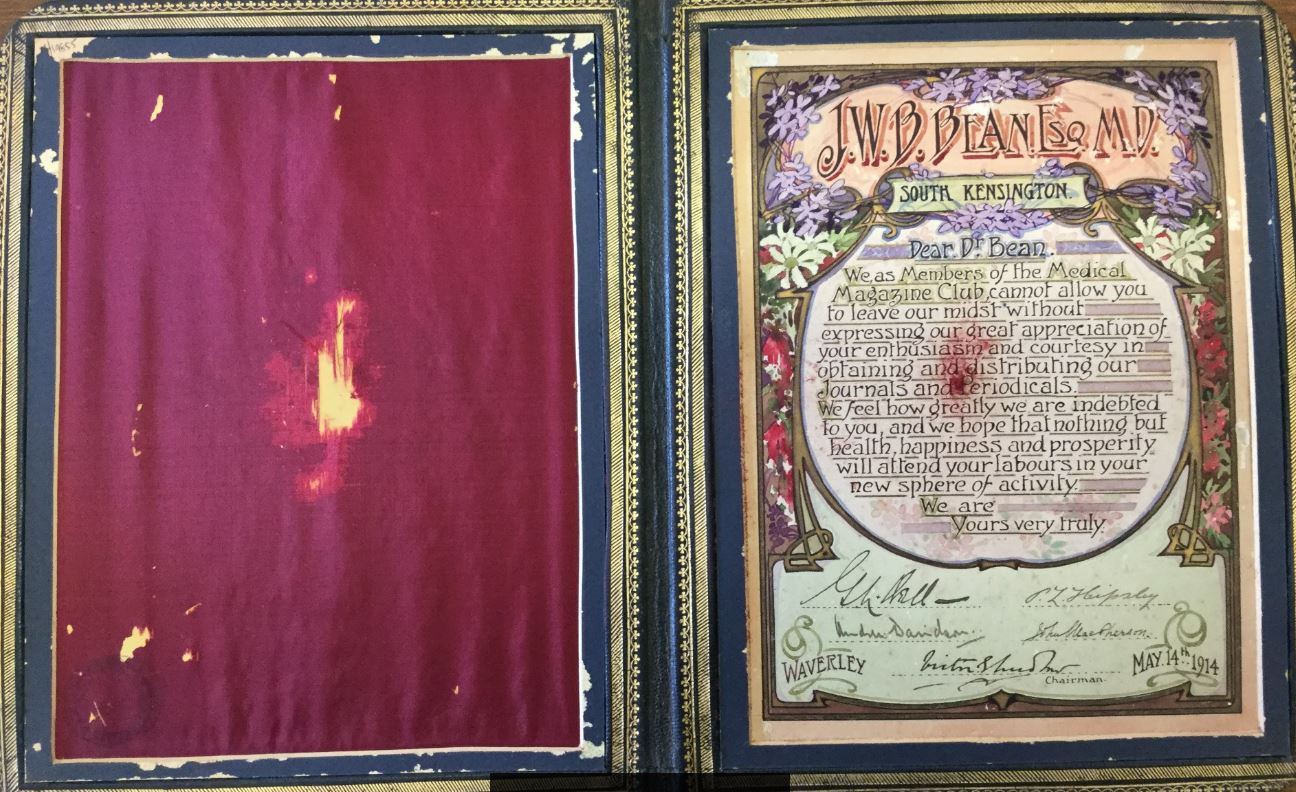 This illuminated address is in the collections of the Society of Australian Genealogists. It was presented to Dr J. W. B. Bean Esq. M. D. of South Kensington by members of the Medical Magazine Club in Waverley New South Wales on 14 May 1914.

Few of us will have ancestors who lived as grandly as the occupants of Vaucluse House, but visiting it always sends my mind back in time to imagine what life was like back then.

The imagination is stirred by the heat of the kitchen fire and the smell of basil leaves burning; by the damp and cold as you enter the larder; by the games on the table waiting for their players; and the clothes lying on the bed ready for the children after their baths.

Vaucluse House is situated on Wentworth Road, Vaucluse, New South Wales, Australia. A small cottage was built in 1803 by Irish convict Sir Henry Browne Hayes. The cottage was extended by William Charles Wentworth after he acquired the property in 1827. If you know your Australian history you will probably recognise the name. The house is managed by Sydney Living Museums, which is part of the NSW government.

When I used to visit museums as a child, there were signs everywhere telling you the history of the place and describing the lives of the people. They told us why the places were important, what the object were and when they were made. There is almost a complete absence of signage at Vaucluse House now. The curators prefer to let the visitors interpret things for themselves. I found that confronting at first – I like to read information about the places I visit. However, it does make it easier to let your imagination flow. If you want the information, the guides are happy to talk to you or you can buy books in the gift shop or browse the stories online.

If you are in Sydney, I recommend a visit.